Just a quick note to say that we’re all done! We got into John O’Groats at about 2.30 yesterday after a pretty good ride in the morning; dispatching some pretty monster hills.

We’ll be catching up on the blog throughout the day as we’ve got a bit of time to kill on our 13 hour plus train journey back to Nottingham! 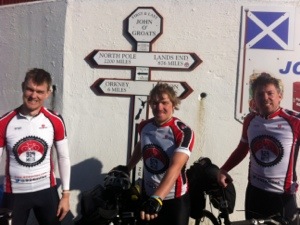 Day 12 was our shortest day at a mere 56 miles to Helmsdale.

We headed north on the A9 from Dingwall after a cracking breakfast at our little BnB.

Scenery wise there was nothing major that stands out. Obviously great mountain ranges that we were pretty glad we were going round rather than over.

We stopped at a little cafe half way and stocked up warm chocolate fudge cake with ice cream to keep us going for the rest of the trip.

I’m arrival in Helmsdale we opted for the only restaurant in town – fish and chips again. We were well and truly beaten this time though – fish suppers in Scotland come with two fish! My advice; order a small fish if you’re up here. 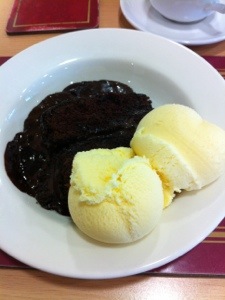 After the ordeal with the wind yesterday we were hoping for a better day today.

We started early again from the best western at Fort William and opted for a cycle path rather than the road for the first ten miles or so. It was a canal path and as such a little slow going. After about 5 or so miles Mark got a puncture so it want exactly the best start to the day but it was dry and the scenery was nice so we we’re still in high spirits.

After sorting the puncture and getting back on the tarmac we again opted for another cycle path on the north shore Loch Lochy. Again amazing scenery and some stunning cycling. After a while this road also deterated into a unsealed gravel path which hit our speed. And then the rain started and literally didn’t stop all day.

Although slow the cycle path was an amazing ride – cut through a pine forest with some unbelievable water falls coming down off the mountain. At one point we even had to negotiate a fallen tree blocking the road!

We finally hit some decent tarmac and made up some time round Loch Oich and onto Fort Augustus. After a hearty lunch of soup and haggis sandwich we motored further north following the A82 along the west coast of Loch Ness.

After a while we turned off the main road and headed over a very large steep hill towards our stop for the night at Dingwall.

It was a good day, better than yesterday but very very wet. Here’s what my hands looked like by the rand of the day

It’s on the windy side. For those thinking about cycling over the Scottish highlands with driving rain and head winds gusting up to 60mph (if you believe the news) then my advice is maybe don’t.

To put a bit of perspective on this – imagine cycling down hill at about 15 miles an hour. Then the wind blows and you stop dead and fall off your bike. You look round and the two blokes behind have also stopped dead. You look at each other and think ‘oh well only another 40 miles in this direction’. Let’s just say the first two thirds of our day were ‘interesting’

After that it got a lot better – bit of shelter and easily the best down hill of our trip so far – A82 heading north from the top of Glencoe Mountain down to Glencoe village. 30mph for about 10 minutes through some unbelievable scenery.

Right that’s about it for today… It’s bed time

Weighted down by the previous night’s fish and chips, we set off on day 5 with Nantwich as our target.

Leaving Hereford behind we opted for some scenic B roads before we stopped for our first break to thaw out (and grab a quick bacon butty) in a (classy) bus stop cafe in Leominster.

Following our quick stop we headed for the castle town of Ludlow for another quick pit stop to brace ourselves for a long stretch on the ridiculously busy A49 to Shrewsbury. Having successfully dodged the artics we grabbed some lunch at a lovely little place called Cafe on Cop.

Refueled from a hearty lunch we headed for Nantwich to finish off the 86 mile day. Opting for the quieter and more picturesque B roads we made it to our home for the night, The Cheshire Cat, and a celebratory curry to finish off the day!

Having survived the night at strange holiday park in west huntspill, the 4 of us set off again, heading for Bristol.

After a nice route though orchards and a disused railway, (including a very dark tunnel) we hit Belmont hill to get us over Clifton Suspension Bridge which was amazing.

After a celebratory coffee we said our good byes to Pete and headed north to the Severn bridge. A light rain shower, a couple of photos and a 2 mile ride across the Severn estuary and we were into Chapstow for nice healthy Greggs for lunch.

As it was getting on and we were only half way, again we opted to change our route and hit an A road. Turned out to be a great shout as it was the road through the middle of the Wye valley which had some awesome long downhills and stunning scenery.

After the Wye valley we headed through Monmouth and then a long drag up to Hereford. After 86 miles and a climb of 6475ft we finally rolled in at 8.30pm in the dark. We were all ruined and ordering fish and chips was an ordeal because we couldn’t think straight.

If you’re passing through Hereford than check out Batterlious… great fish and chips but then that could have just been the tiredness.

With an earlier start than the previous two days, fuelled by a breakfast at the golden arches, we were on our way again. We were joined by Peter Norman (a school friend of Andy and Paul) for those wondering who the fourth bloke on the photos is.

We made the conscious decision, after the hills if the previous two days, to change our route and avoid exmoor to save our legs. We choose a route a little further south of Exmoor, which started pretty normal on the A39, and then got a whole lot better as soon as we turned off. There were some awesome views north of Exmoor as we rode and some great long down hill stretches which were the nicest of the trip so far.

We made good time today and arrived in about 4.20. Nice to have a bit more time in the evening and a bit more of a relax before our first long day tomorrow.

So lack of phone coverage and longer rides than anticipated have impacted the blog updates a little.

Day 2 was a bit of a mixed day. Some amazing scenery and a couple really nice stops in Tintagel, for a spot of afternoon tea, and then Bude for lunch.

The hills were immense – we climbed a total of 5,000ft, even though we ended up changing the route to try and avoid hills. The highlight of the hills, if you could call it that, was a 20% decent followed by about an 18% up hill. Need less to say we were all pushing by the top.

It would appear that avoiding the traffic on the A roads really does mean that you do all the hills in the county.

We arrived in to Barnstaple way behind schedule at about 6.30. A quick turn around and then into the town centre for dinner at the aptly named ‘The Panniers’ for steak to help with recovery.

So how to sum up day one, Paul’s just had an ice bath, Mark’s already in bed and i’m struggling to put a sentence together.

The day started for us, as it appears, like for many others starting out on this ridiculous adventure: a photo in front of the sign, the signing of the guest book and an emotional farewell.

Trying to avoid the various A roads, the route took us through some stunning Cornish villages (and Redruth), winding through country lanes, up and down and up again.. And down again.. And up again.. the clear disadvantage of the scenic route.

For the final leg of the day we opted for the less undulating A39, far less scenic but oh so less hilly.. Verdict for the day – a good intro to Cornwall followed by a well earned burger and pint. 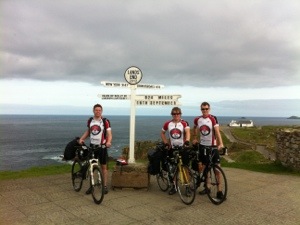 Ok so there’s only an hour an a half until we start the ride. We’re just making final preparations and getting some good food down us in the apartment before we leave for Lands End. Don’t forget you can Watch Live everyday of our journey. Keep up the support!

Until we set off

"Just passing through Wick. 907 miles down, only 17 miles to the finish line! #LEJOG"
over a year ago
"Because we didn't think it would be hard enough tomorrow we though we'd take on a few pounds. Good job we had starters http://t.co/FeTtnx3l"
over a year ago
"The result of squeezing out my socks following 10 hours of a very rainy day. I offered Paul 50 scottish £'s to drink it.. He said no."
over a year ago
"The smallest chinese restaurant in the world in Dingwall. Good food though - If you're ever around here check out Dings http://t.co/3eKV4v1u"
over a year ago
"Bath hands at the end of the day - it was a little wet out there today. It didn't stop raining all day http://t.co/NBR4Glxw"
over a year ago
follow @924miles on twitter